When does an object become waste? It could be stated categorically that the definition of WASTE is really ambiguous, since the decisive moment when an object ceases to be an object as such and becomes waste depends exclusively on its location.

The definition of waste and the metamorphosis of old things

So, for example, if you have an old shoe with a broken sole, it still has the status of an old shoe when you are aware that you still have an old shoe in your wardrobe. However, when you feel that it no longer belongs to you, that it bothers you and that you need to remove it from your space, then you take a decisive action: you place the shoe in a container and remove it from your usual environment, leaving it in a place destined for discarded and unwanted things.

The waste we generate is only the fruit of our own absolute will.

This shoe undergoes a metamorphosis without changing shape, the same metamorphosis as the diary referred to in Julio Cortázar’s writing in one of his stories in the 1962 book Cronopios y Famas:

As soon as he is left alone on the bench, the pile of printed sheets becomes a diary again, until an old woman finds it, reads it, and leaves it as a pile of printed sheets. She then takes it home and on the way uses it to pack half a kilo of chard, which is what diaries are for after these exciting metamorphoses.”

In fact, this extraordinary tale reaffirms the fact that it is not the newspaper or the object that changes, but the perspective we have on that object and, therefore, it is we ourselves who change. The waste we generate is only the fruit of our own absolute will.

What to do with old things so that they don’t become waste?

We know. We can’t accumulate things, and whether you’re a fan of Marie Kondo,  or you’re short on space at home, you have to get rid of certain objects from time to time to make room for new ones. 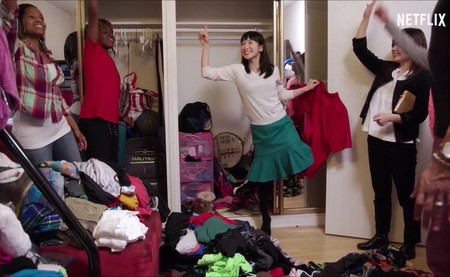 Marie Kondo invites you to order your life by taking away old things. – Photo Source: Netflix.

But… what can we do if the pleasure of getting rid of the old stuff leaves you with an aftertaste of guilt because we are generating more waste by sending it to incineration, burial or being part of marine pollution?

Old, discarded and unwanted things had only one place to drop dead… until now.

Now there is a very viable solution, which we are presenting here with Revivack: the return of that object to the place where it came from, to the company that put it on the market, to the factory that manufactured it, to be recovered in the right way and continue its life cycle, avoiding pollution.

If you want to stop generating waste, you simply have to become an object rescuer!